The mediastinum is a cavity (an empty space within a solid object, in particular the human body) that separates the lungs from the rest of the chest. It also encloses the lymph nodes of the central chest, the heart, aorta, thymus, some other parts of the respiratory system like the oesophagus and trachea. It’s basically located in the thorax or the chest area. Its primary function is to separate the said organs from other organs that can be found in the said area. It is also divided in three parts 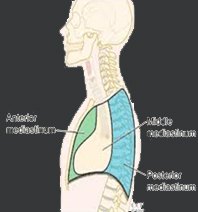 The mediastinum is frequently the site of involvement of various tumours. It is basically an abnormal lump or abnormal growth in the chest area. Germs commonly breed it. Although this condition is rare it is still very deadly and/or life threatening. Weather the tumour is benign, meaning still removable with surgery and/or treated with medications, the chances for it to develop into becoming a malignant tumour (carcinogenic or cancerous) remains high.

Mediastinal tumours may also be the root of various complications; it has the capacity to interrupt different organs in the mediastinum such as the heart, the lungs and different blood vessels. Early diagnosis and early discovery can heighten the chance of complete treatment and recovery.

Unlike tumours found in the middle mediastinum, most mediastinal tumours remain asymptomatic or do not show any symptoms but it does cause abnormal weakening of the body even unexplained weight loss. Most commonly, tumours in the middle mediastinum compresses the heart and parts of the lungs which may cause chest pain, coughing of blood, fever, hoarseness or even Stridor (a high-pitched, noisy respiration, which can be a sign of respiratory obstruction, especially in the trachea or larynx).

Mediastinal tumours are commonly treated with surgery followed by radiation or chemotherapy and photochemotherapy, another form of chemotherapy using drugs that convert to cytotoxic activity only upon light exposure.